Nigerian Army Ranks: The original elements of the Royal West African Frontier Force (RWAFF) in Nigeria were formed in 1900.

In the verge of the War, British-trained Nigerian troops saw action with the 1st (West Africa) Infantry Brigade, the 81st and the 82nd (West Africa) Divisions are the ones that fought in the East African Campaign (World War II) and in the Far East. In Nigeria, from a force of 18,000 in infantry battalions and supporting units, strength came forth around 126,000 in three divisions by the end of the Nigerian Civil War in 1970. In the sphere of doctrine, the duty of the Federal Nigerian army did not basically change: its task continued to remain close with and defeat an organized enemy.

The effect of individual personalities is basically greater in the armies of developing states, as they tend to have weaker institutional frameworks.

Key personalities involved in Nigeria included then-Colonel Olusegun Obasanjo. Obasanjo is principally significant owing to his efforts to reorder his command, 3 Division, during the civil war to foster its logistics and administration. The reorganization he rated made the Division able of carrying out its task that ended the civil war

The Nigerian Army fought the Civil War significantly under-resourced; Obasanjo’s memoirs chronicle the lack of any stocks of extra equipment for mobilization and the “haphazard and unreliable system of procurement and provisioning” which lasted for the entire period of the war.

Arms embargoes imposed by several Western countries made the situation more difficult. in this article, i will be showing you the  list of Nigerian Army Ranks and their Symbols

The field with is another name for General of the Army, it is the highest and apex rank in the Nigerian Army but unfortunately, no personnel since the establishment  of the Nigerian Army, have ever reached up to this rank.

As seen above, The insignia of Field Marshal is made up of a golden eagle and a cross of sword and baton surrounded by two branches.

the second after  the field marshal is the General  and so far in Nigeria, it is  highest attained rank in the Nigerian Army, a General is identified by a silver eagle, two golden six-pointed stars and a cross of sword and baton.

the third in this category is the Lieutenant General. He is the  third most powerful rank in the Nigerian Army. Its symbol is composed of all elements making up the symbol of Major General, and a golden six-pointed star. 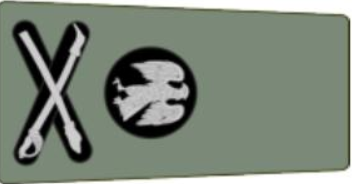 Major General is the second rank from bottom in the powerful phase of ranks in the Nigerian Army.

As show above, The symbol of Major General is made up of a golden eagle and a cross of sword and baton

Brigadier is the lowest ranking general officer in the Nigerian Amy. When the Brigadier is been appointed to a field command, he is typically in command of a brigade consisting of around 4,000 troops.

liken  to that of a Colonel, the insignia of a brigadier is made up of one silver eagle and six-pointed stars arranged in a triangular form. 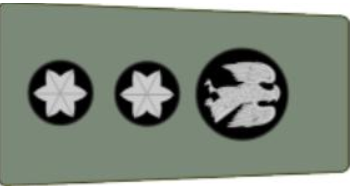 Colonel is among the top  ranks in the Nigerian Army. And he play  crucial duty to be responsible for the regiment (A regiment a permanent unit of an army).

The insignia for Colonel is one silver eagle above a vertically aligned two six-pointed stars.

Lieutenant Colonel is one the most important ranks in the Nigerian Army, and becoming one is not an easy feat.

The insignia for this rank is made up of one silver eagle above a vertically aligned six-pointed star below. 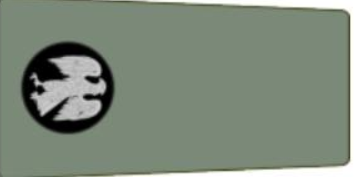 In the order  of the Nigerian Army, the rank of Major is next after the Captain. It is liken  to the naval rank of lieutenant commander in the other uniformed services.

They can be identified by a “silver eagle” marked on the badge of their uniform. 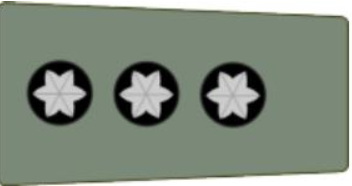 This is undoubtedly  the most famous  in the rank within the army as it is known by both the learned and unlearned.

And as we have said before , First Lieutenant and Second Lieutenant are subordinate to the Captain.

The insignia of a Captain is made up of three six-pointed stars which are vertically aligned.

You can differentiate  a First Lieutenant from the second lieutenant by looking out for the “vertically aligned two six-pointed stars” marked badge on the uniform.

Like the Lance Corporal, Second Lieutenant is the lowest rank in the hierarchy  of commissioned officers.

The word as used  ‘lieutenant’ means substitute, and Second Lieutenant means the second substitute of a Captain.

It is easy to identify them as the insignia designated to this rank is a single “six-pointed star”, the star seen in the Nigerian Army emblem. 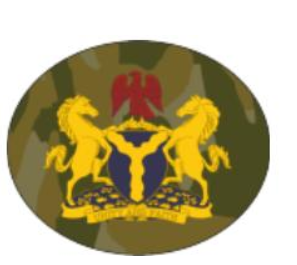 They are charged to deal with military equipment and can be identified by an insignia which has the “Nigerian coat of arm.” 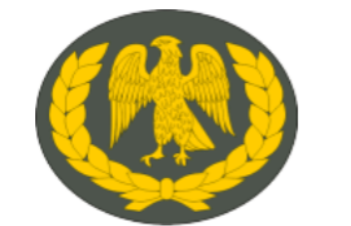 The warrant officer is the next in line of rank  rank after Staff Sergeant in the order  of Nigerian Army. It is thought  to be a good rank for a young military personnel.

as shown above, A Warrant Officer can be identified by the “golden eagle surrounded by golden crown made of olive leaves” marked badge on the uniform. 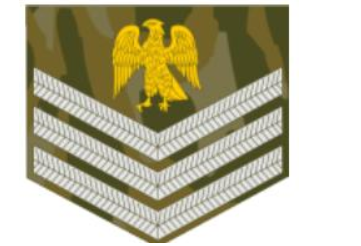 Staff Sergeant can be identified by “a golden eagle above the triple V” marked badge on the uniform. 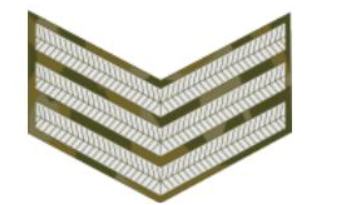 The sergeant  comes after Corporal in the order of Nigerian Army. And although  it is senior to both a Lance Corporal and Corporal, a Sergeant in the Nigerian Army is still a junior non-commissioned officer.

To identify a Sergeant, look out for the “triple V” marked badge on the uniform 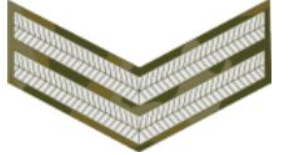 this is second to the last in the hierarchy of Rank , the Corporal is the next rank that a Lance Corporal assumes upon promotion.

Although Lance corporal is the lowest rank in the Nigerian Army, a soldier of this rank, ranks higher than a private (Privates are the newly recruited soldiers).

12 Things to Know About LASTMA

How to Get Proof of Funds in Nigeria